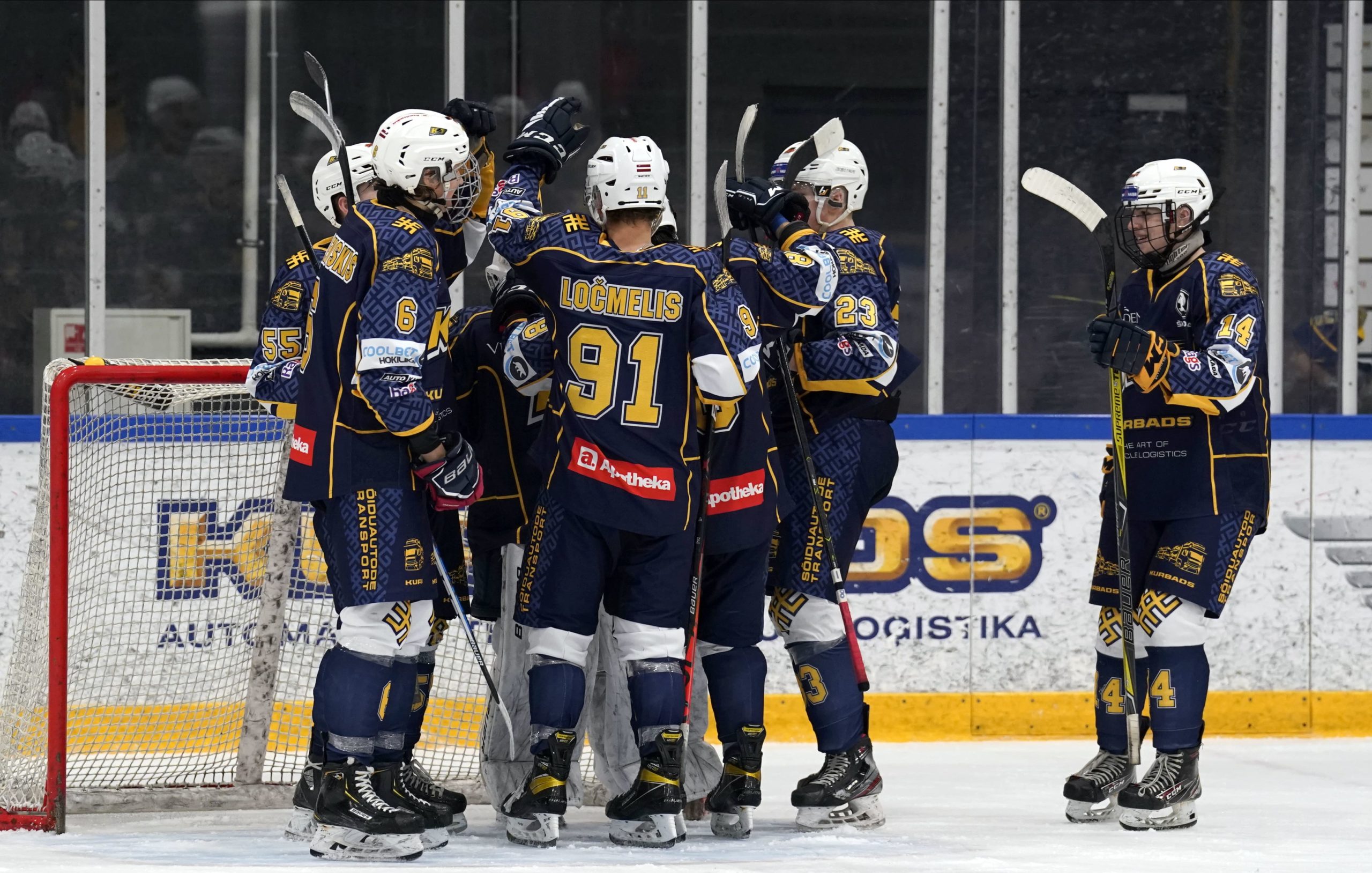 HK Kurbads won two wins in a row on Saturday and Sunday in the Estonian “Coolbet” hockey league, beating HC Panter on his field. After two successes, Kurbads increased his lead over Panter hockey team.

Before the games, the two teams had met twice. The first time the Tallinn Club won, and in the second game, Kurbads took the victory. Welcoming the visiting guests, “Kurbads” was in the second place in the table, ahead of “Panter” by one point, but now the Rigans account has 20 points in 13 matches, and “Panter” – 16. Meanwhile, the leaders with 25 points are Välk494 hockey players.

In the first game on Saturday, “Kurbads” won 4: 2. The coach entrusted the safety of the goal to Arginto Milberg, while the goalkeeper of the Estonian national team Willem Heinrik Koitma took the goal for them.

From the first minutes of the game, the owners of the field were actively pressing in the opponent’s area, not allowing the “Panter” hockey players to start their attacks and dangerously endangering the visitors’ goal, but the “Panter” goalkeeper repeatedly saved his team from losing the goal. Milberg had a bit less work in the first period, and after 20 minutes of play, the result of the match was not revealed.

In the continuation of the game, the efforts of “Kurbads” to get to the scored goal paid off. In the second period, Robert Binde was punctual in the numerical minority. Although “Kurbads” got into the minority twice more and the opponents were close to scoring several times, the selfless game of the field owners in the defense gave a minimal advantage to the Rigans after 40 minutes.
In the third period, the two teams exchanged goals for a short time. First, the guests equalized the result, but Toms Hartmanis regained the lead – 2: 1. In the middle of the third, Panther had a numerical majority and was 2: 2 on the board. With four minutes left until the end of the period, Mārcis Zembergs regained control of the “Kurbads” club with a great goal in the upper corner, but Renārs Undelis, a newcomer to the team, scored an empty goal. For an experienced hockey player, this was his debut in the Estonian Championship and he has to admit that he was quite successful. Undelis earned 1 + 2.
A day later the two teams met again and this time “Kurbads” won (5: 2). Jānis Puriņš, Emīls Ločemlis, Matīss Bīriņš, Renārs Undelis and Emīls Masteiko were the winners.
After the first third, the owners of the court had a minimal advantage (1: 0), but after 40 minutes of play, “Kurbads” was in the lead with 3: 1. “Kurbads” also did better in the last section of the game, beating the opponent’s goalkeeper two more times, while Čalpa was beaten once.

“We knew that difficult games were waiting for us with the Tallinn’s Panters , because it is a good team. They play well in the majority, so we had to be disciplined. We lost to the Panther team not only in the first mutual match of the championship but also in the test game before the season. The goalkeeper of the Estonian national team plays an important role in the Tallinn team. We only let scoring four goals in two games, so I am generally satisfied with the performance of the players over the weekend, ”said Tom Bluks, head coach of Kurbads, who explains the joining of the experienced Undelis with the desire to extend the team’s application in the play-offs.

“There are several reasons why some young players will not be able to help us in the near future, so we attracted Renārs. The team application also contains my name, I keep myself in shape because we know that the playoffs will be difficult. Physical strength will be very important, ”Bluks explains the situation with the team.
Meanwhile, Marts Erme, head coach of the Panther Club, said about the games in Rumbula: “Both teams wanted to win, but” Kurbads “realized their moments better. It was nice to play games here because the hosts had organized them perfectly. I assume that this is a very good experience for the new players of the opponents in the Estonian championship. We are an amateur team and no hockey player in our club receives money for playing. It must be understood that hockey is not the leading sport in Estonia and attracting sponsors is a difficult process. ”