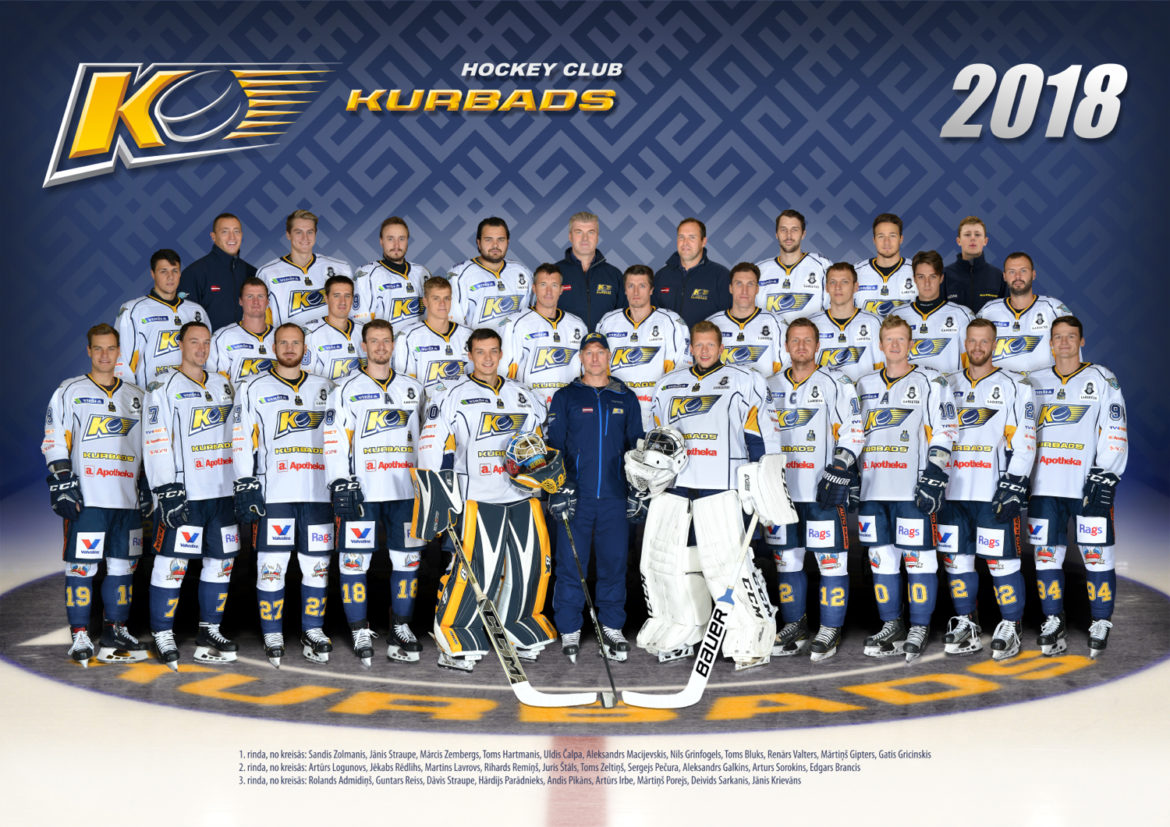 In 1996 not only Latvia’s National ice hockey team won B division and advanced to Elite level world championship but also it is the year hockey club Kurbads is founded.

HC Kurbads is the dream of  mythological hero Jānis Šīraks and team’s captain Andis Pikāns. The dream that started playing ice hockey on Ķīšezers and local sports school. Many company’s “Kurbads and CO” clients and other ice hockey fans, who are somehow connected with car sales and transports, were invited to play in the team.

In 1996 team achieved:
1st place in amateur league’s B group.

In 1999 our team in the city where wind is born Liepāja organizes a “Kurbads” cup. Great team play allows club to win its own tournament.

In 2000 team keeps playing in Independent amateur league without much success. It also fails in Agni cup. After unlucky Kurbads does not give up and changes its roster a lot.

In 2001 team changes coaches. Aleksandrs Veselovs is replaced by Oļegs Jurenko, who brings new ideas on the team. Kurbads returns in new quality and fulfills its motto: “The men are back!”. Team finishes in 2nd place in Independent amateur league’s regular season but wins the cup. This season Kurbads for second time goes to exhibition games in Finland, making it a tradition.

In 2002 Independent hockey league expands with 4 divisions and Kurbads fights for win in strongest group – Superleague. This battle for title is closely followed by yellow and blue Kurbads fans who are everywhere chanting team’s motto: “The men are here!”

2002/2003 season is finished in 2nd place in NAHL Superleague regular season, losing by one point to HC “Royal Tec”, but in the playoffs in the same season the opponents have no chance and cup is convincingly won by Kurbads!

In spring 2003 with help from former Latvian national team player Normunds Sējējs HC Kurbads travel to Slovakia, where team is examined by Slovakia second division clubs. Achieving one victory and two losses, but getting priceless experience.

For 2004/2005 season HC Kurbads steps up one step in Latvian hockey hierarchy and takes part in Rigas Open hockey championship, where they sensationally finish first, so they get promoted to the Everest in hockey of Latvia – they are invited to play in Latvijas Virslīga. Highest possible level of hockey in country. But as club is semiprofessional and every player has its own job outside hockey, club rejects the offer allowing DHK “Latgale” to play in Elite division.

In spring of 2005 Kurbads participates in Latgale Cup 2005 (successor of Kurbads cup), in which team earns 3rd place, losing to HC “Brest” and HC “Latgale”, but leaving behind Estonians HC “Panter”.

In summer of 2013 Kurbads announces its plan to participate in highest level league in Latvia – Virslīga. Not only to take part but challenge for title. Team’s roster is changed almost completely. Team finishes first in regular season but in six games in final loses to HS “Rīga/Prizma”.

Kurbads pursues its dream to win a title. Minor roster changes and signing former National team star players Rodrigo Laviņs and Aleksandrs Macijevskis. Team is ready to fight for the title. Team once more gets through to the finals but loses to Mogo in six games. Silver medals.

Kurbads working to fulfill its aim – to become Latvian hockey champions. The core of the lineup stays the same. Valuable addition is former National team player Juris Štāls. In a renowned Latvian cup Kurbads to the finals where in a fierce battle loses to Mogo 3:4. In a regular season we end up 3rd in the standings. A win in the last game would make us first. In the Playoffs we easily make it to the semis, beating HS Rīga team coached by Leonīds Beresņevs, the head coach of Latvia National team. In the semifinals after a loss in the first game we come back strong and win series 3-1 agains Mogo. In the finals we are opposing HK “Liepāja”. We struggle in the first games and are losing 1-3 after four games. We unite and show the best hockey equaling the score. In the seventh game after 0:3 after first period, we come back once again and draw the score. In the overtime the luck is on HK “Liepāja” side and we earn silver medals.

This season doesn’t change anything – team aims to win Latvian Champion title and Latvian cup! Road to Latvian cup was without problems. In the Final everything looks good until 2 minutes until the final whistle when “Mogo” team equalizes and later scores in overtime. In Latvian league regular season team in the last game of the season gets 2nd place that allows to start series from semifinals. HK “Zemgale/LLU” in a real battle is beaten by 3-2. In the finals we face “Mogo” again. First three games are real struggle as Mogo always wins in a close battle. 0-3 after first three games. Then the team comes together and turns around the series, winning 4 in a row and earning the title for the first time in the history! Kurbads – Latvian champion!